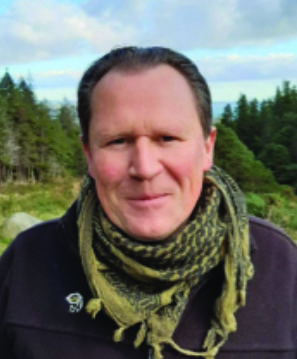 Donal Kelly grew up in the town of Antrim, about 17 miles north-west of Belfast, and has lived in Belfast since 1989. His great-grandfather worked at Harland & Wolff and helped to build RMS Titanic and his grandfather was a tram/trolley bus driver, an Air Raid Warden during WWII and a senior union rep in the Belfast Linen Mills.

Donal’s background is in the aerospace industry, having worked for Belfast company Shorts/Bombardier for 17 years (until redundancy in 2002 as a result of the 9/11 attacks). After re-training, he worked for several years as an Outdoors Instructor before getting a job as part of the Visitor Experience Team at the new Titanic Belfast visitor experience, opened in 2012 on the 100th anniversary of the famous ship’s launch.

In the early 1990s Donal was involved with the ‘Peace People’, an organisation originally set up in 1976 in an effort to stop the cycle of violence engulfing Northern Ireland at the time. He also holds a ‘Community Relations’ qualification.

In 2016 Donal started offering his own guided walking/cycling and step-on coach guiding under the name of ‘Belfast Mic Tours’ and began using state-of-the-art radio units to ensure participants hear every word and story. His specialist area’s include Titanic and Belfast’s maritime & industrial heritage, Game of Thrones (he was an extra in Season’s 1&2 and has the pics to prove it!), and Belfast’s unique links to the founding of the USA.

Donal holds the highest level of Tour Guiding qualification available in N. Ireland – the Level 4 Blue Badge – and has 8 years experience guiding in Belfast, the Causeway Coast and other area’s of N. Ireland.

Let Donal provide you with a unique and memorable experience during your visit to Belfast and N. Ireland. Tours can be customised to suit you or your groups requirements and interests. Go to Walking/Cycling Tours to book or e-mail info@belfastmictours.com for step-on guiding or group walking tour bookings over 14 participants.